Rico Nasty is a camera ready living cartoon with an endless array of candy colored wigs, doe eyes frosted with the expertise of a beauty vlogger and mannerisms perfectly adapted to the finite frames of gifs.

The jewel in her finely polished album Tales of Tacobella is the Kidz Bob ready sing-song ditty “Block List,” a bubbly revenge fantasy and declaration of power for anyone who’s ever had someone’s delusional romantic or sexual fantasies projected on you via SMS.

I don’t need to tell you not to underestimate her versatility or prowess as an MC based on her pop star artifice. She’s a self directed businesswoman who knows exactly what she’s doing, and she’s happy to rob you blind while you’re distracted.

Our first glimpse of Uno’s next project is a dancefloor-grind-worthy single perfect for fans of Key!, Sahbabii and Chief Keef’s singing (we exist, ok?).

With the anticipation for Live.Shyne.Die building, I’ll be exactly zero percent surprised to see him grinning from the next XXL Freshman cover, probably next to his buddy Thouxanbanfauni.

The most common criticism levied at Playboi Carti’s breakout self-titled mixtape was that it’s simply a beat tape with ad libs over it. Pi’erre Bourne’s unmistakable production (which of course I’ve written about before) absolutely does contribute to the character of the mixtape; Magnolia woulda been a bop no matter what you put over it.

If all a Pi’erre Bourne beat needs is a “yo, Pierre” drop and a random rapper, though, why does Carti sound so different than longtime Bourne collaborator (and relative of 21 Savage) Young Nudy? And why does Gunna, a YSL signee and Thug protégé who delivers a solid performance across the Drip Season 2 mixtape, fade in contrast to Carti’s incandescent flame over a beat they had equal opportunity on?

Out of his versatile toolbox of flows, the most undeniably unique is a wheezy falsetto, the last word in each bar drawn out creakily as he runs out of breath. It pairs beautifully with a bouyant feature from Hoodrich Pablo Juan on “26’s“, a cut off one of Valee’s two recent tapes.

I hate myself for not researching Hoodrich Pablo Juan when Lil Uzi shouted out the Atlanta rapper on Twitter months ago, because I slipped and nearly missed the excellent HoodWolf project which is just like, the most deliciously nasty and decadent trap shit.

California rappers and A$AP Mob periphery figures D Savage and Joey Fatts teamed up to create this mellow track; there’s something incredibly relatable about the teenage D Savage singing an autotuned melody about hiding out in the house, even if I’m just watching episodes of Japanese Style Originator in bed and not ducking the opps or my enemies.

Gotta Have Some More by Lil Bibby Featuring Tink

Bibby’s Free Crack 4 (Free Crack 3 The Epilogue) has faced endless release delays, the released singles “You Ain’t Gang” and “Aww Man” (with Future) already past their East Room expiration date – I mean, I wrote about “You Ain’t Gang” in my 2016 roundup and the album still hasn’t surfaced in late May of 2017.

Still, Bibby’s staying busy, raising his puppy and dropping WorldStar loosies like “Gotta Have Some More,” with Bibby’s hoarse voice crunching like toasted wheat bread next to fellow Chicagoan Tink’s rich creamy-peanut-butter vocals. There’s a reason why Ja Rule and Ashanti made so many goddamn songs, and there’s a reason Bibby and Tink keep working together.

Drayco’s long been a favorite of mine; Baby Guillotine is back dragging bloody medieval weapons and smirking at your doomed fate with fellow Indiana rapper Mathaius Young. 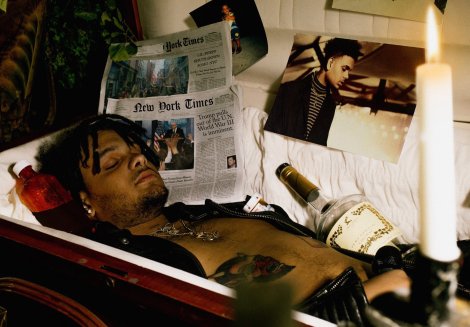 The word “Florida rapper” doesn’t have ultra pleasant associations for me at this point, often conjuring visions of kool-aid dipped white boys with rictus grins of metal glinting in dirty sunshine like Riff Raff or Starfox La Flare, domestic abusers like XXXTentacion, or brown boys throwing around antiblack slurs like Lil Pump.

Those aren’t all equal offenses or anything, I’m just listing reasons why it might seem like I listen to more music out of Atlanta and Chicago. I just do. But I also fuck with a lot of the Sunshine State’s artists who manage not to offend my probably hypocritical morals or aesthetics, and Miami-Dade’s Smokepurpp is near the top of that list along with Palm Beach’s Wifisfuneral.

Lil Purpp rhymes “make the choppa sing like Beyoncé” with “counting chips, chips, chips like Frito Lay” on this dreamy, hazy, and downright relaxed song. I understand that some people don’t like artists who half-sing and half-rap, but then why are you listening to bleeding edge Soundcloud rap from teens with facial tattoos anyway?

I saw Smokepurpp perform in a crumbling movie theatre a few days ago, the historic-building-turned-derelict-shell packed with anti-smoking sponsors and kids in Anti Social Social Club and (Knock) Off White shirts by promoters. Purpp rapped a cumulative total of maybe six lines over the course of the set and invited all of his fans to hop the barricades and climb on stage. Even if you don’t fuck with it, there’s enough teenagers who do to start a riot.

Observations on 90s references as subcultural currency for Mel Magazine