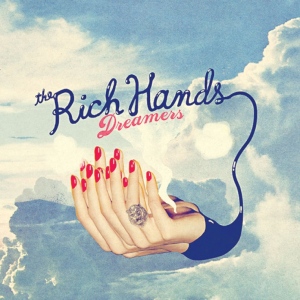 You guys don’t even know how stoked I am to finally see Rich Hands. I’m really into their debut album Dreamers; it’s pure throwback pop perfection, influenced by 60s doo-wop and classic R&B with enough garage fuzz and swear words mixed into the simplistic, infectious lyrics to keep things interesting. They’re touring in support of their new album Out of My Head, released by Detroit’s Fountain Records, and with an excellent line-up of local supporting bands at The Burlington tonight it’s obviously going to be a fucking party.

The Rich Hands, Slushy, Uh Bones, Flesh Panthers
What’s up with The Burlington booking actually decent line-ups lately? And then making everyone start at like 8:45 or something stupid like that? The world may never know. Anyway I will be here double-fisting PBRs and whiskey for sure so come say hi.
The Burlington
3425 W Fullerton Ave Chicago
$6 / 21+

Lil Tits, Kisser, Slayer Kitty, The Baby Magic
This is going to be an extremely weird show. I got the Max Pelt released Slayer Kitty tape off Magic Ian the local tape fair at Cassette Store Day, and it’s like nothing I’ve ever heard; lofi twee doom? It sounds like metal made by fuzzy baby animals.

I saw The Baby Magic a couple of weeks ago and it was the most intense, bizarre performance I’ve ever seen. First time I’ve ever had someone flash me their genitals at The Burlington.
Walleye World
9:05pm / 21+ / Donations / No Jerks / Ask a Punk / Whatever