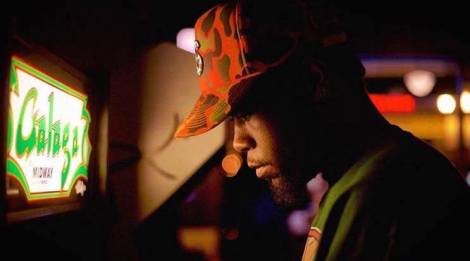 In a city where so many people were not just John Walt’s friends, but his family – literal blood relatives, or damn-near-might-as-well-be – we weren’t that close. He was quiet with me, talking softly enough that he’d have to dip his head to talk to me in crowds, smiling broadly in answers to questions, responding to texts briefly: Yep. Wyo. Bet em up.

I wrote before, in my Top 6 Chicago Songs That Changed My Life in 2016 list, about how the release party for his song Sundress Season introduced me to people who I still see around, who I still spend time with, who I still care bout and try to help where I can.

Maybe that’s why his death has me fucked up. The knowledge that retweeting a new song or writing up a SoundCloud isn’t enough. The knowledge that my ritualistic worrying about my friends, neatly prioritized by which neighborhood they live in, doesn’t do shit.

The Author & John Walt at Lollapalooza 2016

I have a huge tattoo of Santa Muerte on my thigh. Despite her origin in God-fearing Mexican Catholicism (the bootleg flea market version of our occupier’s weaponized religion, a way of continuing our indigenous beliefs under the watchful eye of Spanish priests) the Mexican goddess of death has a vague whiff of the occult about her: the burned-wax smell of botanicas and intimations of her worship by murderous drug cartels clinging to her long cloak.

Despite this, she’s a calming presence in my life. You learn to live with the omnipresence and acceptance of death. There is some comfort in acknowledging death as capricious and cruel. “God has a different plan for him” doesn’t comfort me. I can’t imagine a God whose plan leads to the side of the Metra tracks. I can’t imagine devising a plan for a talented young man that ends before his twenty-fifth birthday.

The knowledge that the people you love can be taken from you at any time is as indelible as my tribute to Santa Muerte. There’s a lot of people In Chicago, including people who are now mourning John, who had to learn that lesson earlier than I did, in more ways, with more trauma, who shouldn’t have had it hammered home again.