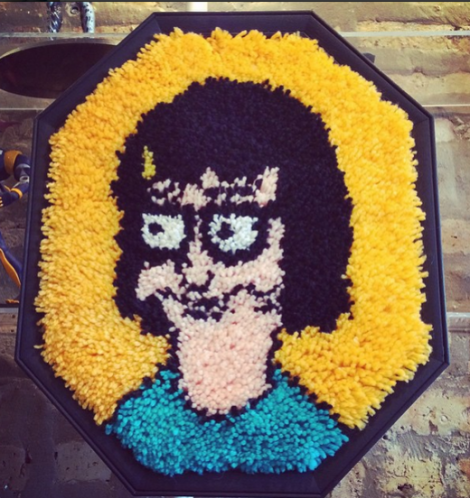 If you’ve ever been to a show at Bric-a-Brac, you’ve probably seen Jen behind the counter. She’s the owner who is NOT eight feet tall and redheaded. It turns out that in addition to running the best little record shop in Chicago, she’s also an accomplished artist whose work draws on pop culture kitsch!

Let’s be real: Bric-a-Brac doesn’t have to have a ton of free shows. They don’t have to spend all that time booking, scheduling, soundchecking, sweeping your ciggy butts from the sidewalk, and pouring out your half-drunk Lime-a-ritas. But they do it out of love, and you should show some of that love back by coming out to support Jen tonight from 6pm to 9pm. 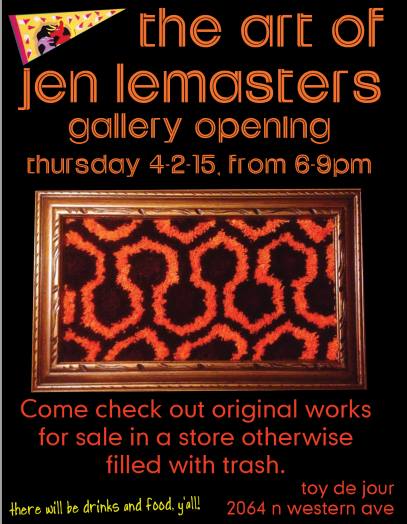 Our Monthly (f)Artist for April 2015 is Jen Lemasters, a warrior from a nearby rival space gang. While she spent nights training at the Scum and Villainy Academy, she spent her days studying art at Ohio State University.

In 2008 she graduated from one and was kicked out of the other. Though the BA in Art and Technology is displayed proudly in the hull of her current rig, the Notice of Dishonorable Discharge due to ‘excessive atomic noogies’ and ‘intergalactic-headlocks’ hangs right above it.

Come check out her work and/or challenge her to a fight on Thursday, April 2nd from 6 – 9pm.

If my appeal to your better self didn’t convice you: there’s gonna be food and drinks, and it’s right by Red Hot Ranch which has some of the best no-nonsense hot dogs and fried shrimp in the city. Looking at some rad art, eating a red hot; isn’t that what life is about?