Thursday was one of the two most SXSW days of my SXSW.  I was out all day, I saw a ton of bands, I made some weird friend at the last show, and I got so drunk that all I have left from the last show I attended are memories of debating my 23-year-old friend on which city was best to move to and a few blurry, bigfoot-sighting-esque photos of mystery bands on my phone.

Two of the bands I do remember from the last show of the day were Pity Sex (who were one of my Riot Fest favorites) and Chastity Belt, who seem to be one of the buzz bands from this year’s SXSW. Both were absolutely killer. Catch Pity Sex at Subterranean on April 4.

The day started out with Elvis Depressedly at Red 7 as part of the Brooklyn Vegan day party. “No More Sad Songs” has been stuck in my head since then and I may go to my grave kicking myself for not seeing them when my friend Andrew tried to drag me out to some 6 pm show they played months and months ago at Township or Beat Kitchen or somewhere.

I later saw them on a bus and tweeted “I think I just saw Elvis Depressedly on a bus!” and received an immediate reply that yes, I had seen them. Anyone who is willing to engage me on social media instead of IRL has my devotion forever. (I may have also seen them at the show I don’t remember. Is that why they recognized me? What if I was an asshole? Oh god.)

I also saw Girlpool at Red 7, who yet another amazing LA lo-fi band (I swear this was LA’s year at SXSW). They’ll be stopping by Beat Kitchen on May 8 with Waxahatchee, which I guess is already sold out, so if you already have tickets, good job. 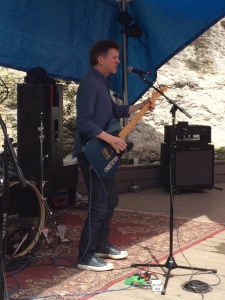 After that, it was back to Cheer Up Charlie’s for the AV Club’s March Into Softness. I hadn’t documented the show super well, so as we were trying to read a hand-lettered sign or get cell reception, I asked “Jeez, why does the band outside sound so much like solo Superchunk?” Of course it was because Mac McCaughan was playing to a half-empty patio at 2:30 pm.

Crushes of the Day

And almost immediately on the heels of Accidental Superchunk, I fell for my top band crush of SXSW: Terry Malts.

It’s one of those things where you know someone exists and know you’d probably like them (they’ve got an LP and a handful of 7-inches out on Slumberland Records and Cupcake’s been talking them up for awhile) but you don’t know how much you love them until they’re a song or two into the first of three times you’ll see them in 24 hours.

Luckily for me, they played nothing but excellent parties, so it was easy to convince myself to see them again. Later that night, they played the Burger/Lolipop party at the Whip In, which is this totally cool convenience store/tap room/restaurant just off the highway that is classy in a way that such a place would never be classy in Chicago.

I ate a frito pie, had like a billion delicious craft beers, and caught The Sloths, a garage band from 1965 who apparently said fuck it and reunited a few years ago (picking up a new front man, but you can’t really tell from the way he completely owns the songs) and have been putting on the best live show I’ve seen in ages ever since. 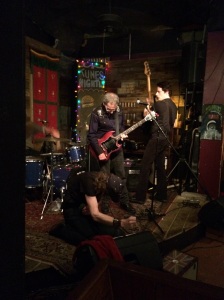 IF THEY PLAY YOUR TOWN, GO SEE THEM.

To close out The Sloths’ set, Tommy McLoughlin reached into his pants, pulled out a Texas flag, and wore it as a cape. Much more pleasant than Tuesday’s incident of a dude digging around in his pants.