Okay, I know it’s Monday and nobody cares about SXSW 2015 anymore, but I’m still going to write these recap posts day-by-day because that’s what I started, goddammit. And Wednesday was one of the best days of SXSW because I didn’t actually do much that felt overtly festival-like.

My day started with Young Buffalo and free cold brew coffee and kale chips at The Wild Honey Pie’s day party at Side Bar. These are some super nice dudes from Mississippi who play pretty, sunny rock ‘n’ roll songs and keep getting more fun each time I see them. In fact, I can safely say the band was better than the snacks and I love the shit out of cold brew coffee.

After that, my friends and I wandered around and scored some more free beers (and saw a boring alternative rock band and a forgettable indie pop band) and then it was time for me to go get ON A BOAT for the Panache Booking Bruise Cruise featuring La Luz (fuck yes I picked the rhyming one).

The bands were all excellent, but let’s talk first about how fucking excellent it feels to be out on the water on a warm day holding a cold beer. 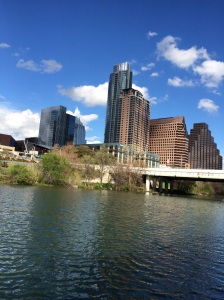 Heaters play very surfy psych rock and are fucking perfect to listen to on a boat. They play the Empty Bottle on April 5 with Wand (who will sound even better in a rock club than on a boat) and you should go check ’em out. 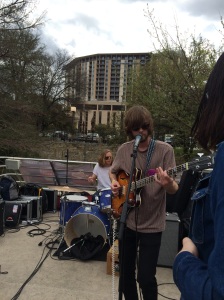 Happyness. are some charming alternative rock dudes from London who are playing Subterranean on April 8. I’m not sure they’re old enough to have the kind of 90’s nostalgia their songs evoke, but I’ll take it anyway. 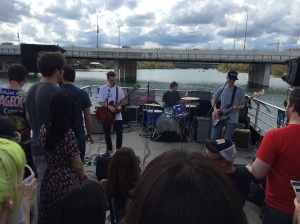 La Luz headlined the cruise. I’d been wanting to see them forever and they were so, so good. Everyone in the crowd got way into them and I had to fight to get a shitty picture. They aren’t playing Chicago any time soon that I know of, but you should listen to them anyway if you like fun.

After the cruise, I ate Whataburger and then went out for cocktails with a friend in Austin and was in bed reading a 1980’s feminist scifi novel by midnight. Can you name a more perfect day? I sure can’t.