As you can see from the SBS Show Calendar, we’re officially moving into winter and the onslaught of awesome shows to try to shoehorn into your week has slowed a bit. Before you pull out the fuzzy blanket and Remembrance of Things Past (or whatever giant book you’ve been totally meaning to read) to settle in for the whole damn winter, stop and check out all the cool things that are still going down. Like the US Postal Service, neither snow nor sleet nor sold out shows will keep Store Brand Soda from sweating profusely in our parkas in a basement all winter long. I’ve got some show picks for the upcoming weekend here and Cupcake has an abbreviated list of must-see shows for the rest of 2015 over at Do312.

Mitski, Palehound, PWR BTTM
I’ve known about tonight’s STACKED lineup at Beat Kitchen forever. I wrote about Mitski at this year’s SXSW and Palehound was also a SXSW discovery a few years ago. But like the US Postal Service, sometimes I’m just super slow at getting to things, so I totally snoozed on tickets. Happily for these 3 kickass bands, the show is now sold out, but maybe you’ve already got tickets or have a friend who is bailing because of a few snowflakes. If you can get into this one, do it. And please have all the feelings for me.
Beat Kitchen, 2100 W Belmont Ave
8:30 pm / $12 adv / 17+ / SOLD OUT

Fuzz, Walter, Oozing Wound
If you read the above description and thought “the opposite of that” then you probably want to be at the show at Thalia Hall tonight. This was probably already on your radar, but just in case it wasn’t, here are some key words: Ty Segall, garage rock, hard rock, metal. Also sold out, but again it’s supposed to start snowing around 9 pm and you know your friends aren’t going to want to go all the way to Pilsen if there’s weather involved. Start tweeting about how you’ll take an extra ticket and just see what happens. No weak pits, okay?
Thalia Hall, 1807 S Allport St
9:00 pm / $15 / 17+ / SOLD OUT

Dumpster Babies, Fuck Knights, Fire Retarded, The Evictions
Speaking of no weak pits, Tall Pat Records dumb punks Dumpster Babies are headlining another stacked bill of local rock ‘n’ roll at The Empty Bottle. To make it even more killer, 3 of tonight’s bands are featured on the latest 4-Way Freakout cassette, celebrating its release at tonight’s show. Plus the Bottle’s got coat hooks so you can bundle as much as you need to heading to this one and still be comfortable and cool when you go to dance.
Empty Bottle, 1035 N Western Ave
9:00 pm (9:30? 10? The Bottle does what it wants) / $5 / 21+

Mauve, Principality, Star Tropics, Pale Spectre
I’ve written about Star Tropics before and they are still one of my favorite Chicago bands/pop bands/things existing in the universe right now. They’re also playing a free show at Cole’s with Mauve, who are doing a really nice psychedelic/electronic thing, and two Minneapolis bands, Principality and Pale Spectre. The song on Principality’s soundcloud is some straight up 80s goth jam so if you’re moping about missing out on any concert tickets, I think this might be your vibe. And it’s free. Hard to argue with free. I will be at this one so come say hi!
Cole’s Bar, 2338 N Milwaukee Ave
9:00 pm (lol probably 10) / Free / 21+ 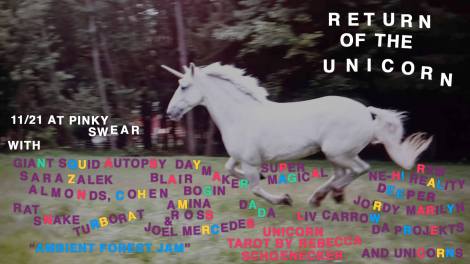 Beach Slang, Lithuania, Worriers
I’ve seen Worriers 3x this year and I’m not 100% sure we’ve mentioned them yet on Store Brand Soda. Maybe Cupcake fixed this mistake already, but I’ve definitely fucked up. So let there be no doubt: Worriers are awesome. Pop punk for people with feelings and politics and actual complicated lives and stuff. I know that everyone into sad punk is also all over Beach Slang, but Worriers are the band on this bill I am most enthusiastically evangelizing in 2015. Also sold out, so if you have tickets for this one, don’t be a dingus and just see the headliner.
Subterranean, 2011 W North Ave
8:00 pm / $12 adv / 17+ / SOLD OUT

Peach Fuzz, The Peekaboos, The Landmarks, Electric Sheep, Nomar
There’s a pretty rad show happening over at Club Soda Saturday night with The Landmarks in town from Michigan and locals Peach Fuzz, The Peekaboos, Electric Sheep, and Nomar also on the bill. I have been into The Peekaboos since like 2011 though I haven’t yet seen them with the latest iteration of their lineup. Super fun sloppy shouty, hooky, garagey Chicago punk. I haven’t caught Peach Fuzz yet but lately they’ve been popping up on all kinds of bills I’m into. Based on their Bandcamp, they’re the kind of local rock band I want an infinite supply of. If you’re bummed you missed Friday’s Mitski show, come check these folks out.
Club Soda
7:30 pm (but probably hella punk time) / $5

Pinky Swear Return of the Unicorn Fest
Okay like I’ve been to Pinky Swear and I have literally no idea how seemingly every musician, artist, poet, and performer in the universe is going to fit into that basement, but I’m on board with the process. This all-day event kicks off with some low-key tea-sipping posi vibes and ambient music at 10 am, followed by an increasingly energetic celebration of the unicorn from 2:30-11 pm. Check out the Facebook page for more context. It sounds like an experience.
Pinky Swear
10:00 am / $5-10 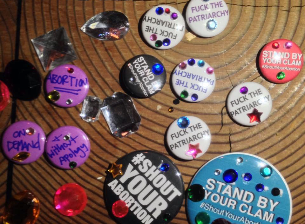 The Landmarks, Minor Wits
If you liked The Landmarks at Club Soda, you can catch them again at their Bric-a-Brac in-store with Minor Wits, a local power pop/pop punk group I’m just now hearing about but am kind of super into.
Bric-a-Brac, 3156 W Diversey Ave
5:00 pm / free / all ages / BYOB

Hibou, Bloom, Color Card, Jewel Case
I saw Hibou when he came through town a couple years ago and holy fucking shit. If you are into dreamy pop sounds, if you bought my recommendation of Star Tropics, if you have $12 to spend on a show, check out this band. Come early for this one because the supporting bands also rule.
Subterranean, 2011 W North Ave
9:00 pm / $12 / 21+

Outer Minds, Lil Tits, Strawberry Jacuzzi
Do you like fun? Do you like supporting essential healthcare services? Then you want to be at the SYA773 Fundraiser for Planned Parenthood at The Empty Bottle Sunday night. All ticket sales from this fucking killer lineup of local bands will go to supporting Planned Parenthood, who you may recognize from their low-cost preventative care, birth control, and STI screening services or from some totally bullshit videos Republican lawmakers are obsessed with. Either way, come rock out and feel good about the work you’re supporting.
Empty Bottle, 1035 N Western Ave
9:00 pm / $8 / 21+