Much like these recaps, my enthusiasm for SXSW was waning by Friday and Saturday. I very much wanted to find a dark, empty bar to park myself inside and wait out the rain and the crowds. Despite my flagging mood, I saw a few awesome bands I super want to tell you all about. 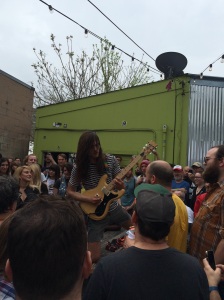 After catching Diarrhea Planet at Side Bar, I walked up Red River and ducked my head into Beerland long enough to catch The Shivas. If you like kind of woozy, kind of surfy, kind of noisy garage rock, you should like The Shivas. 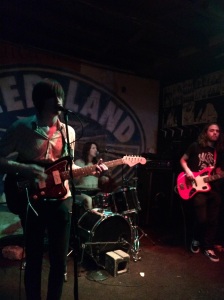 Continuing my streak of good times, I headed out to see Hinds, a surfy garage pop group from Spain who played 16 shows at SXSW, 2 of which I was privileged to catch. They seemed like the coolest, hardest-working people and were delighted to play a weird corner of a burger place in the rain or an empty ballroom while still half-drunk from the previous night. They’re my pick for SXSW band who most deserve success.

As the rain and a chill settled in on Friday, I decided to save myself a trip back to the Airbnb (in my hubris, I’d not grabbed a jacket and was currently layering Liz’s Diarrhea Planet t-shirt over my other t-shirt for warmth) and hit a thrift store for a sweater. I struck out on finding a Goodwill, but I did find a coffee shop, rediscover the thrift store I’d wandered into two years ago when my shoes gave up the ghost (Treasure City Thrift), and catch a bit of a queer cumbia night at the thrift store, so that was cool. But I failed to find a jacket or a sweater and by the time I got my coat and got back downtown, almost every party was at capacity.

Sob by Sobwest, Part I

This brings us the part of the festival where I walked around the east side of Austin in the rain for 2 hours waiting for the Don Giovanni Records showcase to start, which was a pretty effective way of getting myself in the mood for Sob by Sobwest, our nickname for the earnest, confessional, anti-capitalist festival I didn’t know I needed but spent most of the rest of the weekend attending.

Izzy True makes pretty music and frontwoman Isabel makes rad comics, too. You can catch her at CAKE this June!

If you have ever had feelings, Mal Blum probably has an awesome song about those feelings that will make you feel 1000% less alone and more hopeful and shit. Feelings include but are not limited to: dating, gender, mental health, stupid parties, capitalism, being tired of your own crap. 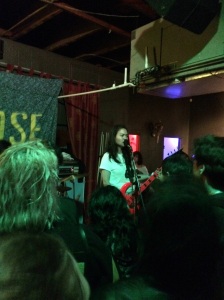 Mitski is also a great listen for people with feelings! I was pretty done with crowds by the time she went on at the Don Giovanni show so I bailed early, but I caught her again on Saturday. You should check out her album Bury Me at Makeout Creek.

Downtown Boys were also fucking incredible. I did not get any photos, but jeez if you want a band who can make bringing your politics of radical empathy into the pit seem fun and cool, these are your people.

Saturday morning started well enough: I arose well-rested and convinced my friends to head down to Spider House for a few bands and some coffee before reentering the madness of downtown. We saw Hinds a second time and also caught a second set by Heaters and saw Las Rosas, who played some fun, catchy songs under a disco ball.

However, the show also featured my final Crotch By Crotchwest encounter. Babes’ set started normally enough: playing some weirdo psychedelic garage punk whatever whatever the kids are into. I looked away for a second and looked back at the stage to discover the lead singer had taken all his clothes off and hitched up his underwear for further effect. He spent the rest of the set fiddling with his briefs and I was 99% sure I was going to see his dong (thankfully, I did not see his dong).

Seriously, dudes, keep it in your pants.

Other than that, my Saturday was a lot of wandering aimlessly, eating barbecue, seeing bands I’d already seen, and finally catching Mitski again at the Father/Daughter Records show at The Liberty then sticking around for a few more bands. 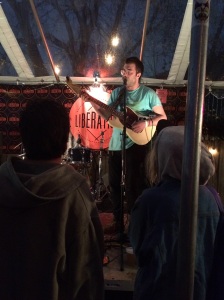 Small Wonder got real and said everything I was thinking about the festival, which was cool except I kind of felt complicit in capitalist bullshit after that, which sort of puts a damper on participating further in capitalist bullshit (he also went on right as my $14 food truck order was ready so I wound up feeling guilty while trying to eat some ill-conceived steamed bun taco in the rain).

Soft Cat were my other sad jam that night. They played a stripped down set with just two guys, but it was the perfect quiet, chill, decompressing sort of thing that I wanted after 5 days of hustling to blog about the rock ‘n’ roll.

I tried to rally and Francisco The Man‘s set helped with that, but by 10:00, I was ready to get some sleep and head back home to my cat and my friends and my familiar problematic relationship with capitalism. I did miss Terror Pigeon closing out the fest with a killer 1 am set at Chain Drive, but that’s pretty much my only regret.